Do you Know how Hearing Aids Came to Existence?

The hearing aid you're wearing now has undergone hundreds of years of improvement and innovation. Learn more about how hearing aids came to existence and how it has evolved.

If you wear a hearing aid now, it probably fits easily in the palm of your hand, is nearly invisible when you wear it and is comfortable and easy to use. But what you may not know is that your hearing aid is the product of hundreds of years of research and improvement. Here’s a look at how modern hearing aids evolved.

Hearing aids date back to the 17th century, when many hearing impaired people started using “ear trumpets,” horn-shaped devices, often made of animal horn, seashell, glass, and later metals, which were wide at one end to gather sound delivered through a smaller opening by the ear. They were awkward and bulky, and most had to be held with one hand while in use. Worse, they offered only slight amplification of sounds.

The advent of electricity along with technology used in Alexander Graham Bell’s telephone ushered in a new era of hearing aids. New York City’s Western Electric Co. began producing some of the first electrical hearing aids in 1920. These offered 70 decibels of amplification, but at nearly 200 pounds, were far from portable. Four years later, the company improved on the design with a portable hearing aid that weighed just 8 pounds. Its electrical components were kept inside a small wooden box attached to a receiver that users held to their ears. Though they could finally be carried with the user, they were not at all inconspicuous and many in need of them refused to wear them.

It might shock you to know that wearable hearing aids are a relatively new phenomenon. Invented in 1938 by Chicago-based electronics manufacturer Aurex Corp., the models consisted of a thin wire connected to a small earpiece and then to an amplifier-receiver that clipped to the wearer’s clothes. The receiver was wired to a battery pack, which strapped to the leg. Amplifiers were smaller and required less power. These hearing aids gained popularity, but their separate battery pack was still cumbersome.

In the ‘40s, World War II technology brought smaller hearing aids which employed circuit boards and button batteries to produce more compact and reliable hearing aids. The batteries, amplifiers, and microphones were combined into one unit that could fit in a person’s shirt pocket or be concealed in a woman’s hairdo. The unit was connected to an earpiece via a wire. They were not yet invisible, though wearers tried to camouflage them by hiding them in their hair or clothes. True one-piece hearing aids, worn entirely near the ear, started to become possible with the invention of transistors in the late ‘40s. By the early ‘50s, transistorized hearing aids were released and became more popular than tube-based hearing aids.

In the late 1950s, Otarion Electronics, in Chicago, introduced the first hearing aid worn entirely at the ear—the Otarion Listener. The electronics of the hearing aid were placed in the temple pieces of a pair of eyeglasses. This made the hearing aid much more discrete and these models became popular even among those who did not require eyeglasses.

The 1960s: Your Grandpa’s Hearing Aids

In the 1960s, more modern hearing aids began to appear. The first behind-the-ear hearing aid was released by Zenith Radio about 1964. It was marketed as weighing just 7 grams and having more than 500 more amplification power than transistor-based models. Feedback was still a concern, but the hearing aids were easier to use than previous models. People who are reluctant to get hearing aids today frequently think of these models, which were clunkier and more difficult to use than today’s hearing aids.

Digital models debuted in 1996, and programmable hearing aids, which can be fine-tuned according to the patient’s needs, were introduced in 2000. By 2005, digital hearing aids made up more than 80 percent of the market. Most of these hearing aids on the market today are nearly invisible and offer superb amplification and acoustic feedback control. They can also come with features that reduce tinnitus or other hearing-related conditions.

Hearing aids have come a long way and today’s devices are lighter, more versatile, comfortable, and discreet than ever. If your last experience with hearing aids were the kind your grandparents wore, you have a lot of catching up to do! Come into Hearing Unlimited in the Western Pennsylvania area and see the new generation of smaller, sleeker, more technology advanced hearing aids.

Articles that appeared in The Institute and on Beltone.com contributed to this article. 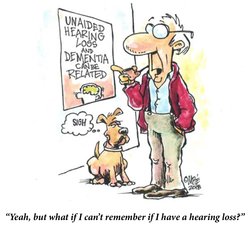 Hearing Loss and Dementia: Understanding How the Ears Affect the Brain